This year's science fair was held at the Université du Québec en Outaouais in Gatineau on March 13, 14 and 15, 2015.  Eighty-six projects developed by primary- and secondary-level students from Québec's Greater Outaouais Region were on display.

This year, six of the projects had sufficient elements relating to meteorology, oceanography or related sciences to be eligible for CMOS prizes: After evaluation of the projects selected by the two CMOS representatives, the jury assigned the following prizes:

See also their Winners Link showing the CMOS winner at the top. 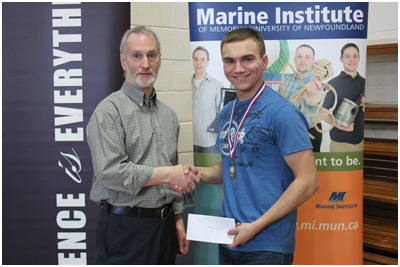 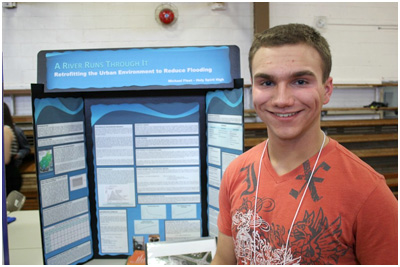 Michael was also one of our overall winners and is attending the National Fair in PEI. (information provided by the Science Fair Committee)

The CMOS judges were Martin Taillefer and Paul Pestieau.

This was a little prototype system to be used to skim ocean surface to collect debris and garbage on the ocean surface.  The development, design and execution was outstanding - impressing both judges.

Inspired by the BP Oil Spill.  Oil Spill clean-up analysis of different ocean basins.  The development of the project was excellent.

Also Inspired by the BP Oil Spill.  This was an analysis of the type of soaps used to clean wildlife after a major ocean oil spill.  Then they inferred how the chemicals of the soaps used would affect the local ocean-eco system.

This year's science fair was held at the college Saint-Alexandre in Gatineau on March 14, 15 and 16, 2014.  Seventy-two projects developed by primary-, secondary- and collegiate-level students from Québec's Greater Outaouais Region were on display.

This year, the Ottawa Centre's representatives, Serge Nadon and Yvon Bernier, determined that six of the projects included sufficient elements of meteorology, oceanography or related sciences to be eligible for CMOS prizes.  From that list of six projects, the Expo- sciences judges awarded the following two prizes:

See the page dedicated to the Montreal center science fairs.